In 1962 Der Spiegel published a cover story about German rocket scientists who went to work in Egypt, or so it was suspected, to help Nasser build weapons with which he would, or so he promised, destroy the “Zionist entity.” 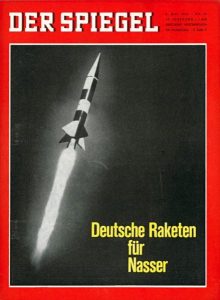 This week, Der Spiegel’s published a 2- parts article, based on Rise and Kill First, a summary of the Mossad report on the affair of the German scientists, and the documents relating to the recruitment of Hitler’s favorite special operations officer, Otto Skorzeny, as the most important Israeli agent at that time.

This is one of the most dramatic moments in the history of the Mossad: A top Mossad official, A German born who lost his entire family in the Holocaust, recruits Skorzeny, who was described by British Intelligence as “the most dangerous man in Europe.” And this man, Skorzeny, a fugitive Nazi war criminal, resolves the number one threat to Israel’s security if not its actual existence at the time.

All of chapter 5 in Rise And Kill First is devoted to this affair, based on Mossad documents and on-the-record interviews and Mossad operatives involved.

Today at 23:30 the public national German TV, ARD will air a documentary by Kersten Schüssler and I prepared on the topic which is based on that chapter: